I’m sure there’s more I can’t think of, but these are some of my favorite products for working in oil paint.

Gloves in a bottle. I have a tendency to blend oil paint with my fingers at times. Now that I’ve had cancer I better cut that crap out! Well, this stuff makes it so I still can. I tried wearing gloves that I stole from my surgeon’s office — and wow — I don’t know how so many people work with them on. The sweaty nastiness of it all? No thanks!

I’ve used Old Holland since high school and could always tell the difference between it, and others. It is expensive, so I only use it for certain colors and odd mixes. I’ve been told it is cheap crap marketed to Americans as being fancy, but I find the mix of pigment and oil to be a good balance. Winsor & Newton is always dependable  — not to oily or too solid. My other favorite jam is Williamsburg who I am mildly addicted to. And last but not least, the newer Gambin radiants.

Princeton! I beat the crap out of these brushes and normally deal with fraying and splitting when it comes to fine detailed work. These are holding up better than I expected! I found out a lot of other painters I admire use them, too. They are inexpensive enough that you don’t feel bad about beating them to death and throwing them away. I also enjoy Robert Simmons brushes.

Hog bristle filberts. They are good for large areas — especially large works — because hog holds the paint better. I’m not too particular about the brand. For real, most artists are shocked by how few brushes I actually use. I look at their studios vs. mine and they have multiple jars full in every shape and form and size — while I have maybe 20, and most are never used.

Ampersand gessobord. No complaints here. Then again I work pretty small. Might not be good for really big stuff though, depending on how deep it is.

Centrurion Linen canvas. As far as anything else goes for larger commissions, I have been using a lot of linen mounted on gatorfoam from New Traditions (thanks to Stanka Kordic for hipping me to them).

Linen is something I only started working on in 2012 and I rarely go back to canvas as a result. I know quite a few people who work at The Cleveland Museum of Art rolled their eyes when I told them I was going for the linen mounted on gatorfoam, but it seems like it can’t be any less archival than other nonsense I’ve seen. I guess I won’t be around 150 years from now to know how they held up! For the times when I can’t afford the New Traditions gatorfoam because I’m doing a show and need it in bulk, I turn to Centurion.

For works on paper, artist Christian van Minnen hipped me to the Arches oil paper. I love it, I’ve only done smaller work with it but am curious to see where it would take me on a larger scale.

Since I no longer have a studio and work from home with two spazzy cats, my glass palettes were not going to work anymore. Thankfully I found the Grey Matter paper palette! I like that is has a grey tone for when I mix colors against it, and I don’t have to deal with the task of cleaning it over and over and over. I can even fold it and tuck it away in my paint case for when my cats decide to go snooping. Thanks cats!

I love my blue shop towels. Less lint and crap than regular paper towels, and more absorbent. One sheet just to clean off brushes can go on for several sessions. It is the Quilted Northern toilet paper of towels!

If you don’t have a Silicoil jar to clean your brushes, I don’t know what you are using. They made us buy these back in high school! In fact, I think mine is from when I was 16.

Gamvar Varnish. Accept no substitute! Gamblin were nice enough to send me a sample and I was hooked, especially for work done on canvas or linen. It is so wonderful.

Baby table top easel. People kind of laugh when they see it, you probably expect a monster one when you walk into an artist’s studio (I have one but have used it maybe twice) and not this wee thing. My baby easel can fit things up to 18×24″ just fine.

Lukas Oil Mediums. They are so fancy, and they’ve been a really great line from what I have tried so far.

A great website AMIEN with all sorts of information about varnishing, materials, and all the jazz they probably should teach you in art school in your first year — and don’t. Check it out!

What products are you using that you like? I always want to know.

This will be part of my upcoming solo show in the fall, made possible by the Ohio Arts Council.

This will be part of my upcoming solo show at HEDGE Gallery’s satellite space inside 78th Street Studios this fall. It will be my first solo show of my biomorphic work I have been concentrating on.

She’s 8×8 inches, and available here. Just in time for fall, don’t you think?

Although the creators died, long ago….

I have to sit with it a bit more and take additional photos post-varnish (no colors ever seem to be accurate as they are in real life), but here is my most recent commission. God I love that dress! It took a lot of patience but I really wanted to include it.

Ike does not look amused by this extra cat in the house.

If you ever wanted hear me blab about the music industry, art, Joan Crawford, my awesome husband, and why after everything I’ve been through medically I just suck it up (despite a cat sitting on my catheter bag), well then, you are in luck! I was invited to co-host on motivational talk show LoLoKnows earlier this week. Fair warning, I swear a lot! I guess you could say my version of motivational talk is to tell people to get on with it, and just deal. Otherwise, you are wasting your own time.

Want to know more about the painting series we are talking about? Grab a copy of this baby and get their bios as well… 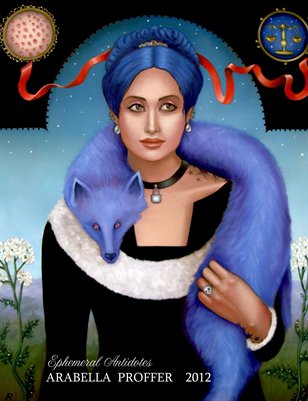 A 2012 catalogue of paintings dealing with faith and medical history. Fictitious portraits, and their stories, written by artist Arabella Proffer.

Speaking of this series, I saw my primary care doctor for the first time in a while — just for a cold — and he mentioned seeing this exhibit in Cleveland by accident. He did full on hand flail EW jestures as he said, “it was interesting….so did you sell any of those?” When I told him I have almost sold it out and the first pieces to go were on skin diseases, he said, “yuck! eeeeeeewwwww”. Then, he proceeded to look deep into my blood clogged nose. I’m so confused right now. I guess this is why he never became a surgeon?

A little 5×7″ painting I did using the left over globs of paint from a larger commission I’ve been working on. I’ve had a bad habit since an instructor at Art Center College of Design told me to always squeeze out more than I need. Well, that gets expensive with oil paint, and wasteful in my case, since I always have tons leftover no matter the situation. It seemed silly to waste anymore.