It’s been a while since I got back from my husband’s book tour, but a lot of photos later I am finally updating about it. Needless to say it was a blast and it timed well with our 13th wedding anniversary. Got to see a lot of old friends and made some new ones, too.

We did 7 dates in total. Of course, everyone at first thought Ben was also a musician or that we were also in a band. Anytime we saw bands who were clearly on tour at a rest stop, they looked us up and down trying to figure out who we were and our deal was. Every stop on the tour went well except for Birmingham, AL thanks to tornadoes (which being from Michigan I would say they were weak). At the same time I can’t call that night a total dud, because one woman came out just to see Ben, buy some books, and get a photo with him! We ended up at a dive — who weren’t afraid of the storms enough to close — where a man asked me if I wanted to smoke pot with him out of a toilet paper cardboard tube, outside in the rain, near an underpass. He was not happy I said no to this offer. In the end, the lights did go out in the dive, all except the jukebox which was on a Thin Lizzy kick, and we did not complain about that one bit.

Charlotte was a great time as always, and it turned into a karaoke Odessey of sorts by the end of the night. I had some video footage of Ben doing 24 Hour Party People at Snug Harbor, but I deleted it to spare him the embarrassment. Bryan Pierce who runs the karaoke at Snug did a great job of picking songs to go with Ben’s book. He had just tried out for “The Voice” and judging by what I saw, he should make it onto the show no problem! Benji Hughes also came out that night, and he bought Ben’s book as well!

The real start of the whole trip was my brother’s wedding in Chapel Hill. And why yes, my husband and I DID shut down the reception slow-dancing to AC/DC if you must know. We figured a while back that we may as well extend it into a book tour if we were going to be driving anyway; the West Virginia stretch being the most painful. But, driving in the South is a lot more pleasant than any other routes I have taken, and aren’t half as boring. Of course the desert is the best, but I take what I can. After years of traveling cross-country on multiple occasions, I also ate at a Waffle House for the first time ever, in S. Carolina. It wasn’t bad, actually. The only weird thing was people were allowed to smoke in there, and it was so…damn friendly. I’ve learned since that the company is owned by the Ritz-Carlton and this may be part of their success as a chain? If you are wondering, no, I didn’t get a waffle but I did try the hash browns.

Next we went on to Meridian, MS which of course I can’t ever talk about without referencing “Hell on Wheels” and the main character doing his whole “ever been to Meridian?” thing. We were treated like royalty thanks to our friend Bill who owns not only several cemeteries and a flower shop, but did a full-on “Bar Rescue” on a place called the Brickhouse that had 64 regional beers on tap. The bar in it’s previous incarnation was a haven fro bro’s and had a reputation for roofing girls. Not anymore! In fact there was a running joke how the Brickhouse was the werewolf bar and the place across the street was the vampire bar (yes forgive the “True Blood” reference) and thus clear lines had been drawn. Despite the clear sections of poverty mixed with a slight college town feel, Meridian had an almost desolate downtown that looked ripe for a comeback. We hope it will rise the way the rest of the South has been doing.

Onward then was New Orleans (duh!) where we got to meet up with many of our friends, some who flew in to meet us, others who had been there, and some who had just moved to the city. Ben’s book event was at Bailey Smith and Greg Dulli’s, R Bar, which had made up a special cocktail menu just for us. Three Sheets to the Kevin Sheilds was an absinthe base, and the Swervedriver was Ben’s favorite which was mezcal based. If you are into shoegaze music, you get why these were so exciting to us. Sure, Ben was the “opener” for the crawfish boil but that is still better than opening for a puppet show — not to mention he got free crawfish! Terrible street side vegan burritos; brunch at The Columns; nuns at an art show; drinks in the 9th; a brunch fight club I may or may not have joined; poolside at the W hotel; record shopping between Desire Street and Piety Street (that must be a punchline to something); and all the usual we seem to get up to when we visit are just some of what I can remember. This was also my first time driving in New Orleans and I’m happy to say it wasn’t nearly as hard as I thought it would be. Sure we missed JazzFest and NoizeFest, but I was a little sad we missed AzzFest. Only after driving past the Hi-Ho Lounge as the girls lined-up for that event were we a bit sad we didn’t go after all. Next time perhaps?

Onward to Nashville! I had never been and we met up with an old friend of mine from high school who showed us around. We were staying a bit out at Opryland, which is a bizarre site that seems a bit like the Trinity Broadcast Network campus mixed with Graceland or Six Flags. The good thing was the free shuttles and the fact that cabs can be found everywhere as means to encourage tourists to go downtown and beyond. The bookstore Howlin’ Books was amazing and also part of the infamous Grimey’s record store. A music town it is for sure, not that I expected less. We toured the Johnny Cash Museum which is small but somehow perfect. We also went to Jack White’s Third Man Records which was nice enough but gave me a creepy Scientology vibe! It didn’t help that the women on staff all had the same red color and hair style to go with their uniforms (yellow and black is his new white and red, btw). I never got around to buying some cowboy boots, but we’ve been invited back to the bookstore for the next tour, so I’m sure I’ll find something when the time comes.

A typical Tuesday night at Robert’s in Nashville, even my husband got up to dance for a moment. I was surprised not only how crazy it was on a Tuesday on all of Broadway, but also the fact that at 3am we had cabs lined up to take us back to the hotel! We met some interesting rockabilly guys from Germany who were on a tour through Vegas, Memphis, and Nashville, so of course we shut Robert’s down with them. But I tell you, that’s the last time I let a couple a Germans buy the beers late at a honkey tonk; my head was pounding fierce the next day.

The last stop was in Cincinnati where we got to hang out with dear old friends. I feel dumb I didn’t get a picture of us all. The DJ for the event played all the great old and new shoegaze-inspired bands, and I think I had one too many bourbon and ginger ales! I liked that the venue had a medical theme going on as well. Someone who my husband hadn’t seen in 30 years even came out to buy a book. Crazy.

The Rake’s End in Cincinnati.

The Verve print at our host’s home.

At the distillery for the liquor we got each other drunk on the weekend we got together, 14 years ago that week. Romance! 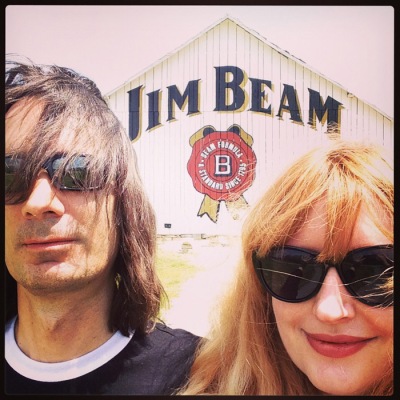 If you are thinking of doing a book tour I would suggest to make it coincide with a vacation you had already planned, or other trips you feel you could tie it in with. I have heard from some very well-known authors and very not well-known authors about how your experience and the sales can be all over the map. For instance, the Meridian, Mississippi date was the most sales because a book club was meeting and librarians came; I expected that date to be the dud — not Birmingham. I’ve also noticed people just really don’t dig book signings the way they do rock shows or even art shows. It just isn’t exciting. We did our best to make it about rock ‘n’ roll and have raffle prizes and drink specials in the non-bookstore venues, and I think those went way better. So, unless you are a best-selling author or a cult hero, I’d look at your book tour as a vacation. We were lucky in that we knew people in each city who helped us decide on venues and all of that — especially cities we didn’t know well. It is much like being a touring band: get a thick skin and if a city is a dud, you go back next time anyway! Every book store and venue treated us well, so there is no reason not to.

Also be prepared for crummy amounts of press no matter how far in advance you do it. Calendar listings are fine, but the fact I sent out review copies of the novel that were requested and I got no results was annoying. This was to both to every arts & culture events blog I could find (most did at least post a listing), as well as print media to the literature editors and the music editors. Then again, one bookstore owner told me that when a rock critic starts to write fiction — let alone gets it published — those who are also music writers or rock critics get resentful and won’t write about it or promote it because that’s what they aspire to do. A musician writing a book seems to be no problem, but music writers writing a novel apparently isn’t welcomed by certain journalists. Hmmm.

Whatever the case, it was nice to hear people had read it in one sitting or gotten copies for their friends. As a rule men tend to not read novels as much as women do, and it was funny to hear over and over again, “no you have to read this, I know you don’t like books but you’ll actually like this one!“