I’m pleased to say my show “Forma and Flora” at The Gathering Place his now on view at their Beachwood, Ohio facility through the winter.

There will be a public reception on Thursday, January 11th from 5-7pm and is on view until the end of March.

You can also view a little spotlight here. I’ll be showing this new painting above, “Preacher” 16×16″ oil on panel.

I had opened this show in the fall at The Gathering Place newly built Westlake location, and the feedback has been great. I always get nervous especially when it is in a public space meant for healing — both the physical and mental. If you or someone you know resides in NE Ohio I highly recommend the programming for both adults and children.

As of this past September I am now 7 years out from my initial cancer removal surgery. I am still under the thumb of the US healthcare system due to subsequent procedures and surgeries that were related to my cancer, but my liposarcoma has not returned in any of the places it should have. It’s also almost 8 years since I began the series that changed my whole art game.

I still look over my shoulder, but not quite as often. I even learned how to go down a flight of stairs for the first time in 7 years! I’ve done a lot of genetic counseling and DNA testing, appeared in a few medical journal due to my anomalies, but no explanation or markers have been found. Maybe one day another test subject will be found, or it will be called “Proffer syndrome” after my dad and myself. I don’t consider “cancer-free” to mean that it isn’t still inside me (I was told it is) but that I am far out enough now to not go into a complete PTSD meltdown the second I find something a little off or don’t feel well. That maybe it will always be in me but won’t wake up again from the dormant slumber and create new tumors; new creatures finding their way through me again. Maybe someday a cure will be found. 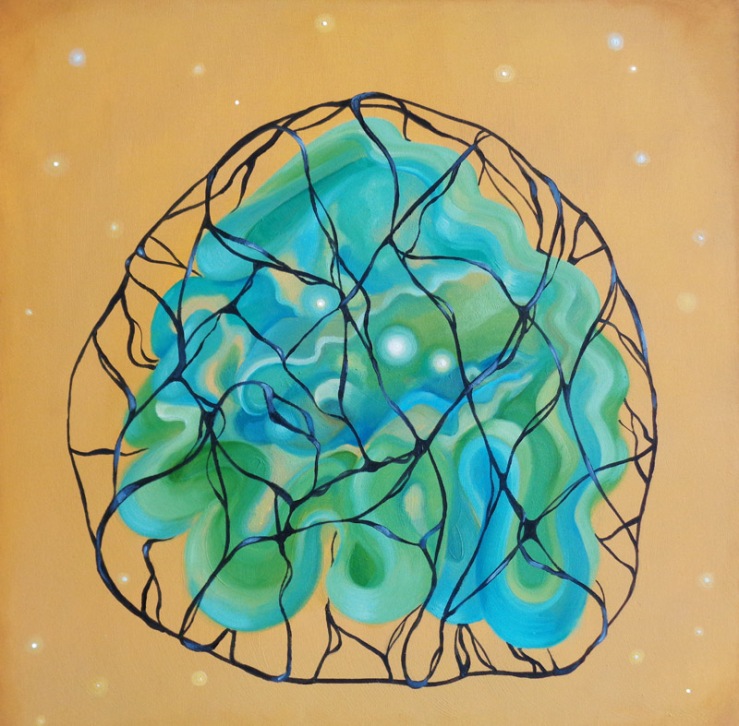 Studying anatomy was never something that I took seriously or practiced much in art school. In fact, I kind of sucked at it. So as a result I’ve gone with a very mannerist approach with distorting anatomy of my figures here and there.  It is all very strange, considering my new fascination the last four years is with detailed and gorgeous medical illustrations of the 17th and 18th centuries. They reveal what fragile beings we truly are, and yet the macabre and gruesome nature of the subject is surrounded by baroque columns and fussy drapery worthy of an aristocratic country house. Although they might be gorgeous, these illustrations were meant only for an elite set of physicians, not the patient. Today, technology has made it easier for patients to have a doctor show them what is happening, not just tell them. This is especially helpful for someone like myself, who thinks in pictures, not words. 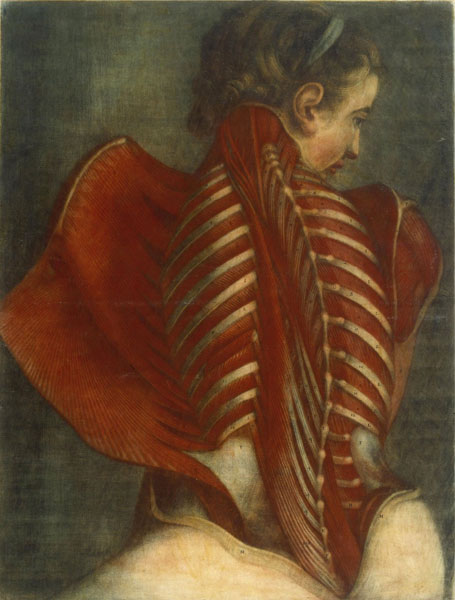 My work changed drastically in two ways in 2010. The first was when I found myself creating surreal biomorphic organisms. Although I started from a place of abstraction, they became filled with strange hybrids of flowers, cells, and symbols that appeared like organisms from another planet. It was only later that I found out I had a tumor that had grown tentacles crawling through my body at an alarming rate. When my doctor showed me the scans, it looked almost identical to what I had been painting – tentacles and all. In the process of being treated for what was a rare and aggressive cancer, I wondered what it would have been like to endure the cures and surgeries of the past — especially as a women. Here at Cleveland Clinic I got used to being poked, prodded, getting naked, and having fingers in…well, all the places you could imagine! But, a few centuries ago if I were a woman of means, doctors wouldn’t dare do such things except a very superficial examination. Modesty over accuracy.

After having a chunk of my leg removed — as well as some interesting restructuring– my work changed a second way. I began researching medicine from the Middle Ages onward; finding paintings that showed even the “cure” for my particular cancer was still amputation. Artwork depicting Saints Cosmas and Damian were the first I came upon, and none of it was reassuring. This all bred a series which I called “Ephemeral Antidotes” was a good way for me to work out my anger and be even more thankful that what I was going through is nothing compared to old remedies and techniques. It makes one wonder which medical practices today will be viewed as cruel and obscene to future generations. Will we be lambasted in 20 years for chemotherapy? It is injecting poison directly into a person’s veins, after all, so how is that different from the doses of mercury people took for syphilis? The emotional content was too much to resist. 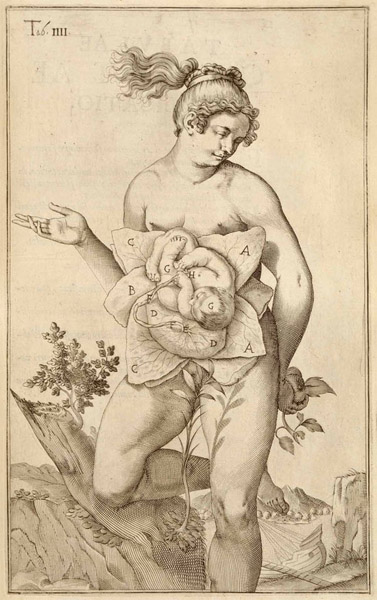 Both series bring together a new interest in medical illustration, microbiology, disease, and the evolution of cells. I explore the particular roles that organisms, medicine, DNA, and hybrids play, all while creating from my own imagination and instinct. I have since painted yet more tissues and masses that resemble what is found to be growing inside me; perhaps this is a bizarre way of attempting to control the cells and viruses in my body.

Transforming those emotional impressions and having it stare back at me on an MRI has been quite an experience and highlights the importance of images for both medical professionals and patients. What the patient says is the truth, might not be what the body reveals as the truth. Perhaps this is why more medical schools are looking at applicants with artistic skills such as drawing and painting? Medical illustration has enlightened us that the human body is a machine; enzymes, cells, viruses, and tissues. I don’t know if each of these entities has a mind of its own, but I have learned to look objectively and be slightly detached when it comes to the viewing of human bodies and their inner workings; it lessens the rage I feel at times whenever my health takes a bad turn (a regular occurance these days), and helps me to understand my own body better. This is especially useful when I come upon an imaging tech who assumes I don’t know what I’m looking at. In fact, these days I’m often asked if I work in radiology, or am a nurse myself.

Once my surgeons and oncologists learned I was an artist, they steered away from saying in words what was happening to me in too much detail. Instead, they say, “Come over I want to show you these images because I know you’ll understand.” And it is true, it will be something I spot right away but would have been difficult to explain over the phone.

By the way, after all these years painting people and looking at medical art, I still suck at anatomy.

A few books I’m reading, and some paintings I’m painting. 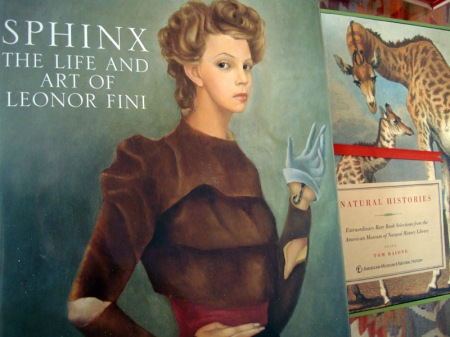 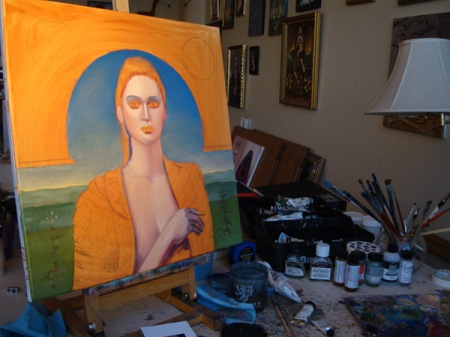 The irony is not lost on me that I went in for a consultation about an elective surgery, and now, it’s turned into a very needed oncology surgery — all while prepping for this show. It’s been a sucky week thus far, and yet I’m not bothered by pictures of anatomy and cadavers. I don’t know what else to do, really.