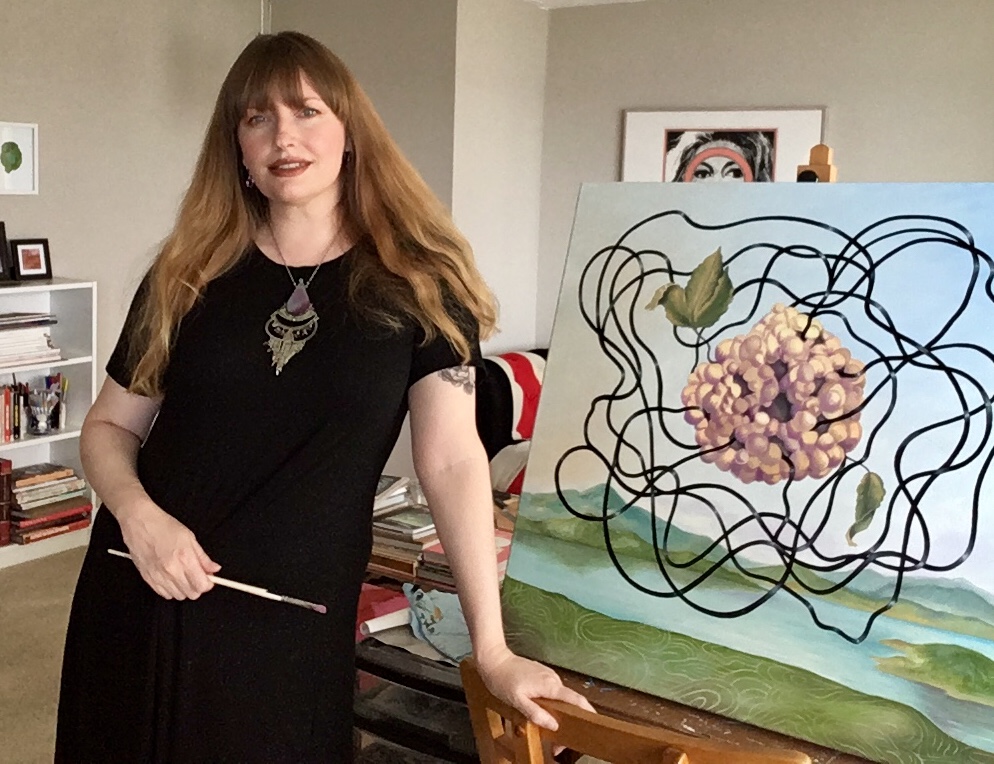 My solo exhibition “Soft Sugars” is now available via Artsy and BoxHeart Gallery in Pittsburgh. The show is up until August 23rd.

I made a little video talking about my painting process and how the whole thing keeps evolving.

As you will be able to tell, I kind of gave up trying to paint with surgical gloves, and I only used them now for varnishing. Also, my cats are pretty darn cute.

It may not be for everybody, but it suits my needs. The only band I couldn’t find was Seven Percent Solution, which is a shame.

Thanks to all who came out for the spring open studios! Boy what a long day it was, but beer and cheese helps me cope in that respect. Also much thanks to Dott Schneider for assisting in the studio-a-rama. Gave me time to get a free massage down the hall during the event! Met some fun new arty farty people and endured some provincial busy bodies, but that’s how it rolls here in the land of Cleve. At least nothing got stolen like at the last event!

The best was the guy who said I was lying in my titles and said my smaller portraits were done in acrylic and not oil, because he could tell. Also, the amount of parents dissuading their children from buying art, even $15 fine art prints, was alarming. Kids always seem to go nuts over my work, but I guess the parents are either cheap or just hardwired in a way I don’t understand; your talking to a woman who grew up with David Miretsky drawings in her bedroom, and some twisted early 20th Century Russian art throughout the home. The whole day I was offered money for the free crappy store bought cupcakes on my desk (one lady tried to give me $5 for one!), but buying the child a print was out of the question. Art = Bad, Sugar = Good.

But, at least several people got to see work in person vs. online, and the question asked constantly was how do I get everything so flat and smooth. I guess I never really thought about it, so it is nice for people to study work up close. The newest surreal flowers got the biggest reaction I think — yay!

I didn’t take many photos, but here are a few… 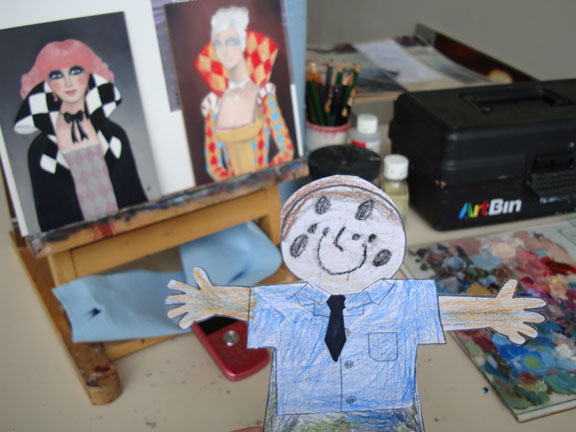 My friend’s son sent me a Flat Stanley, so he’s hanging out with these harlequins I’m painting. 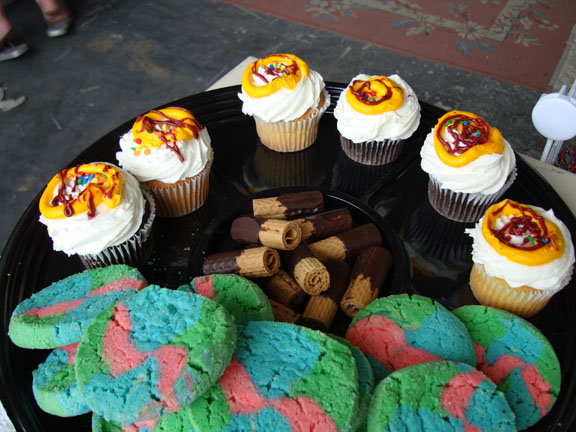 Cupcakes and cookies that people thought was either “installation art”, or were for sale at inflated prices. I should have just sold the damn things. Art Girl Bake Sale! Actually I never thought much of cupcakes, and now they gross me out for good after staring at these buggers for 7 hours straight. The psychedelic cookies were good, however. 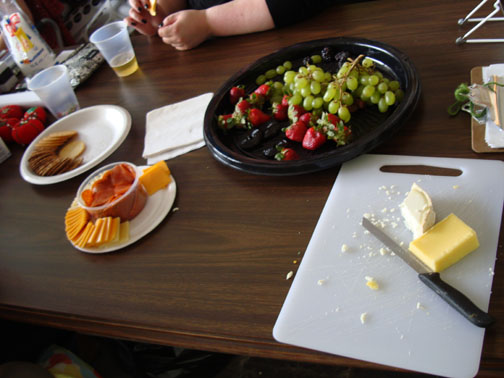 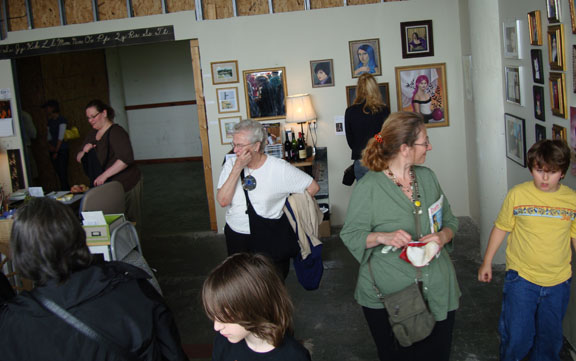 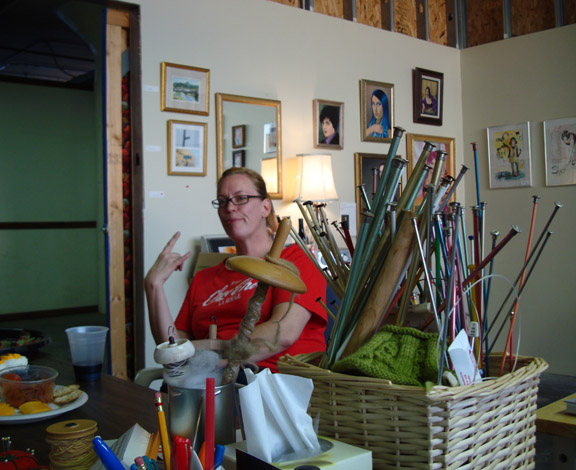 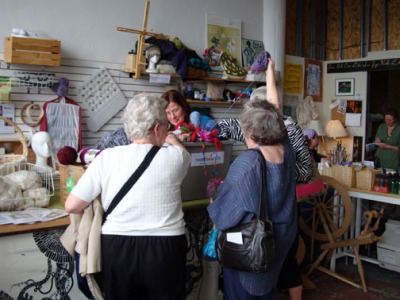 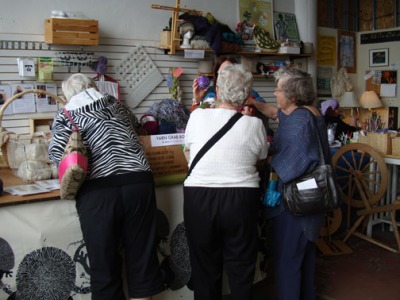 These broads were serious! The bargain bin of yarn became a feeding frenzy. There were a few times that shit got real and women were about to fight like a sale at Barney’s or something. Don’t fuck with women when it comes to yarn, I’ve witnessed this at a few open studios already, they will get nasty I’m telling ‘ya!

I only moved in this past June, but I think it is taking shape. I split the space with Knitgrrl (so thankful her dad put up some nice drywall for us), so here are some shots of my side of the studio. A visitor from Brooklyn nearly cried when we told her how much the rent was, the best deal ever really, and in a former Templar car factory no less.

We will be having a factory-wide open studio event in November. As much as I can’t stand Lakewood, the Screw Factory is the coolest place to be.

So the big news this week is I finally got a studio! I will be sharing a studio with Shannon Okey at the Screw Factory…hehe, screw. I figure that this will keep me from bumming around when I need to do actual work, as well as provide me with a cat hair free environment. Larger work to come? Quite possibly since space is no longer an issue. I will also have my studio open to the public, especially for the Open Studio events that my friend, and Screw Factory neighbor, Gina puts on. The building itself is an active warehouse and factory, but at night resembles the movie Mute Witness. At least I conquered the ancient freight elevator, and if I get really drunk, maybe I’ll take some of the forklifts for a spin! Hoping to have moved in by late June, still need some dry wall and my “day job” work schedule is going to be crazy the next few weeks or so.

On a totally unrelated topic, did you know the singer from Glass Tiger wrote a motivational book? I’m glad I don’t have cable, because yesterday I got sucked into some VH1 Classic and got this damn song stuck in my head. The video is a perfect example of what happens when Canadian musicians do too much cocaine at the peak of bad 80s fashion.