Opening reception: Friday, October 27th from 5pm to 7pm and on view through December 30th.

I’m so happy and honored to be showing at an amazing resource for those dealing with cancer, as well as the facility being named after Sandy! She’s an amazing woman. Please do check out The Gathering Place and both their locations. Not only do they provide group services, but there’s a wig shop, and programming for children (including kitten camp!)

Anyway, more about the showy-poo….

​Arabella Proffer’s biomorphic paintings revolve around a fascination with the history of medicine, microbiology, and surreal organisms. Her work is many times of landscapes combined with abstract representations of organic processes, alien botany, and the cellular basis of the unnatural. Each painting is started from a place of abstraction; becoming filled with strange hybrids of flowers, cells, and symbols; a nature that is a genetically modified in oil paint. 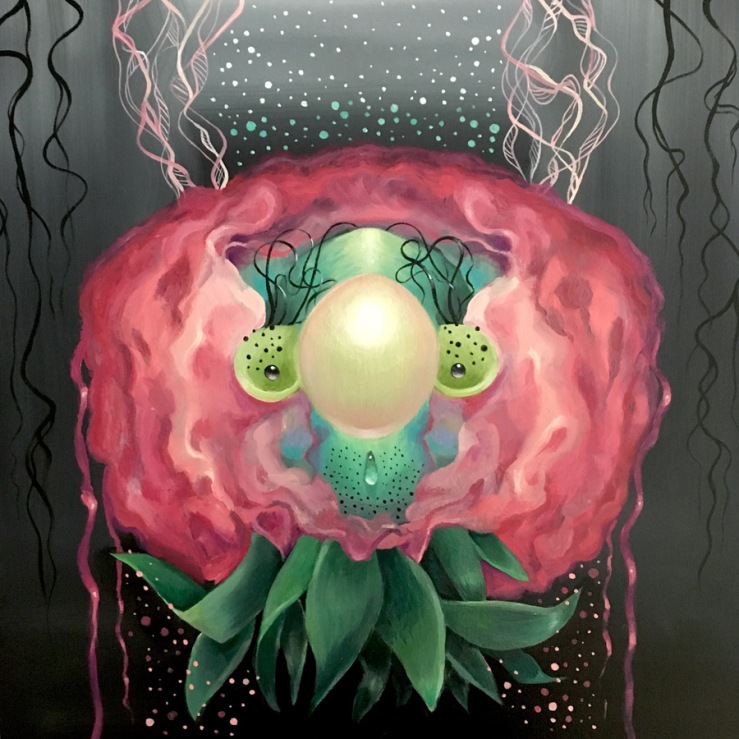 “My work changed drastically one day in 2010 when I found myself creating surreal organic environments. Although I started from a place of abstraction, they became filled with strange hybrids of flowers, cells, and symbols that appeared like organisms from another planet. It was only later that I found out I had cancer crawling through my leg at an alarming rate. When my doctor showed me the scans of the tumor it looked almost identical to what I had been painting – tentacles and all. In succession over the last seven years I had painted other images that closely resembled what was going on in my own body; cysts, growths, and other organ entanglements all later revealed well after the paintings were done. A fascination with the macro universe and micro universe had come about, and made me wonder if I was at times painting in-tune with what my own biology was doing. This was a major departure for me after 12 years of exhibiting as portrait artist.”

Arabella attended Art Center College of Design in Pasadena, CA before receiving her BFA from California Institute of the Arts where she studied under artists such as Derek Boshier, Jim Shaw, and Raymond Pettibon. Arabella participates in solo and group exhibitions throughout North America as well as parts of Europe, the Middle East, and Australia. She was awarded an Ohio Arts Council grant in 2016 and has been a teaching artist at The Cleveland Museum of Art. Her work has appeared in The Wall Street Journal, The Plain Dealer, GOOD Magazine, Hi-Fructose, Juxtapoz, The Harvard Gazette, SF Weekly, Cincinnati Magazine, Snob, Scene, Modain, Hektoen International Medical Journal, and more. Born in Ann Arbor, Michigan, and bred in Southern California, lives on the shores of Lake Erie in Cleveland, Ohio.