I’m pleased to announce my next solo show is April 4th at BAYarts! I have been teaching kids classes at the beautiful BAYarts campus in Bay Village for several years now, so I’m really excited to be exhibiting there. This exhibit will depict fun stuff like amputees, ocular prosthesis, virgin goddesses, and maybe a nude or two. The irony is that I’ve been having health problems, again, and I’m due for another surgery as I’m trying to get work done for this exhibition — so it might not have as many pieces as I had planned originally. However, this is my first big solo show in Ohio since 2009, so I hope you’ll join me. Facebook invite here.

In 2010 Arabella Proffer was diagnosed with a rare and aggressive cancer, and in the process of being treated, she discovered a 16th century painting of Saints Cosmas and Damian where it appeared the “cure” for her particular ailment had changed little. The result of the traumatic experience of having a section of her leg removed gave way to a new fervent interest in medical history, and is chronicled in the afflictions of her fictional female portraits.

After discovering the Dittrick Museum of Medical History was located in Cleveland she spent time doing research, and attending lectures there, that would help fuel inspiration for ways to combine this new fascination with her art. “This series was a good way for me to work out my anger and be even more thankful that what I’m going through is nothing compared to old remedies and techniques. My art and interests were in the way society lived in the past, but with emphasis on the defiant, glamorous, and eccentric. You could have been rich, important, or beautiful, but if sick you would still receive brutal or worthless treatment,” says Proffer, “but I also fell in love with old medical illustrations; they somehow made gorgeous artwork even though it depicts amputation and syphilis.”

“Ephemeral Antidotes: Revisited” explores the medical superstitions and practices of centuries past with a touch of magic realism. Continuing the theme from her 2012 solo show that took place at Loved to Death, in San Francisco, the subjects in her paintings are accompanied by a biography — all written by Proffer — highlighting the fascinating and misguided aspects of old medicine. Proffer takes inspiration from old world mannerist portraiture and medical illustrations of the 14th and 15th centuries while weaving in her own contemporary punk and goth sensibility. Done in oil on linen, her stylized subjects are bold and colorful, yet reveal a hint of the sinister.

Described as everything from neorealism to pop surrealism, her work touches on themes of identity, history, rebellion, and refinement. Earning her BFA from California Institute of the Arts, Arabella Proffer has participated in group and solo exhibitions throughout North America, Europe, parts of the Middle East, and Australia. Born in Ann Arbor, Michigan, she has taken up residence in Laguna Beach (she went to high school there, thankfully, before the reality show), Boston, Los Angeles, and currently works from her studio in Lakewood, Ohio. 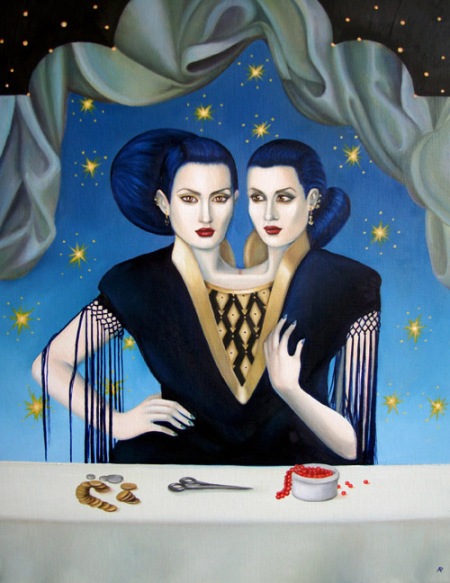