I forgot to post some of these photos from the film I was in for 5 seconds this summer (depends what gets included). I was just happy to get my own prison cell/trailor dressing room. And all the Starbucks and Diet Coke I wanted! 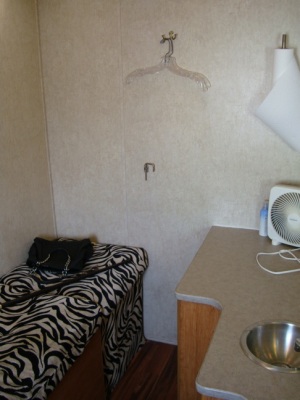 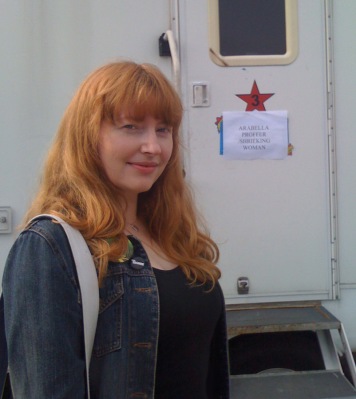 Sadly I do not have any of me in hair and make up where I’m outfitted in a black slip and look like a piece of white trash. The first day when I waltzed onto the set to collect my artwork that was rented (and later purchased by various cast and crew, yay!) I got cast on the spot, and the part was quickly expanded. I guess my hair color sealed it. First, they had me dress as plain ole me: Motorhead t-shirt and leopard print skirt, with a cane. I play 3 different characters, that are all versions of myself. Kind of funny. Here’s me and one of the other people cast on the spot for a scene at a classic car lot… 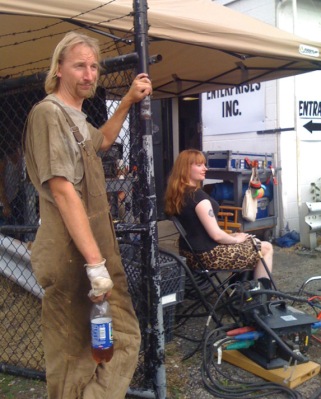 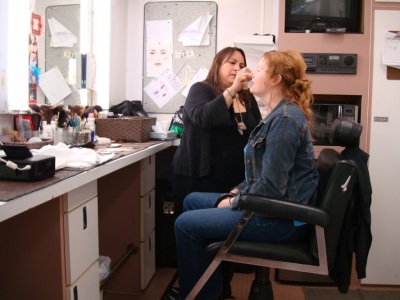 I tell you, nothing curtails eating like being told you’ll be in your underwear — without the help of Spanx — in a Hollywood production the next day. Finding wardrobe that fit me was a challenge in that all the other actresses were a size 0-2, and I’m a 12! It was funny to be handed things to try out that I couldn’t even get over my shoulders. In the end we found something nice that made me look like a weird darker version of Elizabeth Taylor in Butterfield 8. In any event, I got to cuss a lot and ad lib lines on top of what I rehearsed with my on-screen husband. Here I am with him, and my real husband… 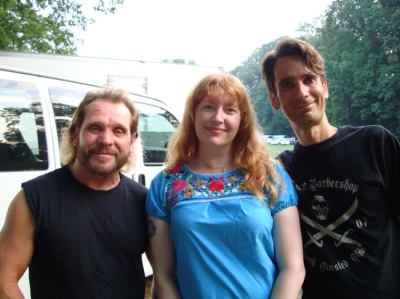 This is going to look really cool when it is done, a sort of gritty noir, Boot Tracks. The most surreal moments for me were hitting Stephen Dorff in the head with a blunt instrument, and my husband and I sitting there having pasta dinner with Willem Dafoe, just chatting — you know, like you do. Wanted to tell him how he saved Boondock Saints, but I figure he got fawned over enough by everyone else.

The casting and production people were very adamant that I go and sign up with SAG now that I am eligible, and pursue acting as a real thing. Not because I’m such an awesome actress but as one person said, “despite your weight, you look amazing on camera even when you’re supposed to look like a mess, people will cast you for your face alone”. I’m going to see a local agency that I heard was good, but aside from that, I don’t know what’s more heartbreaking: being an actress or an artist! I think if I don’t take it seriously as a career, and do it for fun, I’ll be okay.

1 thought on “Snaps from the Set”