I remember when I was 20 or so, a younger guy from my college says, “Have you seen, like, every ancient movie ever made before 1965?”

Well, I haven’t of course. But it is scary that I recognize and know the names of actors from before 1945 all too often. I even know who else they’ve co-starred with, what directors, who they hated, who they slept with and any possible scandals as well.

Maybe I should have been a guide at the Max Factor Hollywood Museum after all? Anyways, here some “Ancient” movies I dig, and maybe you will too.

Female: She runs a car company, yells a lot at board meetings, sleeps with all her hot male employees and has a kick ass pad to boot. This movie is worth it alone for the art deco set design. As for the message that women should act like women and be soft and cuddly and not in any sort of power position that would make her husband feel inferior? Eh.

Employee’s Entrance: Warren William likes to play bad guy workaholics who do business any way they can. In this he plays a very driven Department Store manager; I’ve noticed men who have seen this movie just love his character. It is also very interesting to see how department stores used to operate, and all the jobs that no longer exist. Of course there’s drama and suicide too. At one point Warren even gets Loretta Young drunk on champagne and bangs her while she’s unconscious. Again, worth it for the costumes and sets. Are there any Warren William movies during this period where he didn’t play a ruthless business man gone bad who enjoys getting young girls drunk on champagne and banging them while they are unconscious? Well, I suppose “Imitation of Life”, but that’s gotta be some strong champagne indeed! Anyways, this is a lovely pre-code film with all sorts of drama and suicide very much like “Skyscraper Souls” without the office building part.

The Women: How can you look at this picture and NOT want to see it!? And mind you, Joan Crawford and Norma Shearer really did hate each other that much — they aren’t acting! This movie is “all about men”. There are no men in the movie actually, but you get enough catty one-liners and ridiculous costumes that they would look out of place. Joan Crawford and her bath tub are a hoot, and the movie actually goes into color for one segment: the fashion show. Again though, I’m not too crazy about former playwright/congresswoman/ambassador Clare Boothe Luce and her message in all of this: keep the husband at any cost, even if he is a lying, cheating, deserting son of a bitch.

Skyscraper Souls: Warren William is at it again being a bit of a creep with young naive ladies in the city. This time he is a bigwig bank president property owner at the tallest building in Manhattan. Oh but what debauchery and high stakes can happen when is comes to the sexy world of commercial real estate! The set design (based off the Chrysler building) and costumes again, so worth it! 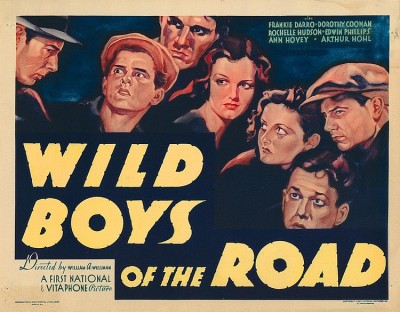 Wild Boys of the Road:  A Steinbeckian picaresque, the episodic movie that follows the adventures of high-schoolers, who go from comfortably middle class, to dropouts who leave their families behind to ride the train to look for work during the Depression. At one point they settle in a shanty town in Cleveland known as Sewer Pipe City, a kid loses his leg to the train, a prosthetic is stolen, there are clashes with police, attempted rape, and more. I’ve seen this movie at least 8 times and I never get tired of it.